Not normally amazed by buttsecks, I just love the word play and had to use it asap.

Got a couple rejections for disjuncture after 6 weeks.

Don’t even mind! I should edit it into an “Abridged” (see, better marketable) version.  Convoluted sentences will also sway today’s reader. Shaving off 40k words suddenly doesn’t seem so hard (tedious, but hard) and that’ll make it infinitely more marketable.

It’s a beautiful Saturday. Watching the last samurai before linking up. Walked over the bridge last night with Asher’s trusted romanian friend till aftergroove. He’s a really cool guy, and I shut up and listened to his stories about world travelling and going through Europe. He shared that Europeans have a common joke, “What speaks only one language?” and I knew the answer was An American before he said it. That’s probably why I’m not super enthusiastic about going to other countries that don’t speak english primarily, while expecting people to speak English. Although I kind of still wanna.  There’s a lot to be said for doing something risky without dying. 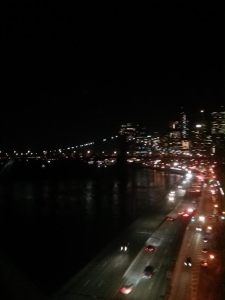 I am a shitty night photo taker.

Cause the only problem with that setting the entire bar, is how sex as the act of copulation’s way vaguer than that if you get super into it – it can be for making babies,  making love, showing affection, being weird, or getting off.  The last one is interesting cause that’s really, going off, and it’s kind of a . . .strange, human exercise if you take control of it. People are like snowflakes in that their going off may not be alike, sure, but it’s like unicorns fucking when two are truly copulatory complimentaries.

(This’s why I wouldn’t try to take away the concept of fucking from lesbians.  Let ’em have it, cause to get where some lesbians have do in their relationships, maybe lots of them have learned to fuck better than most straight Americans.)

I think people who put fucking into a box of glitzy “ohai hump hump moan moan fade away” might get bored and sexually dissatisfied, cause that’s like, eating bread all the time? It’s not pushing the triggers of your chemical cues, the stuff that makes you human and full of excite . . .and by not investing yourself in exploring those cues the difference becomes in the AMOUNT of bread that you eat . . . and I even wonder if that’s why missionary fuckcouples pour themselves into other things instead of proudly acknowledging hours of sweet sweat into each other on the weekly.

Maybe you’re doing it right when you’re pushing the limits of what you’re giving youself permission to do and realize strange urges that’re between the food and sleep and thirst and intercourse drives.

And I don’t mean to get into marquis de sade bullshit, but I’m seeing how in civilized sub and dom shit, the sub really does get to set the true boundary, and is arguably in true control. (If you get off on that fucked up sorta power play.) That’s cause real rough shit is consensual more than abusive.  And this shit is probably why 50 shades of gray sells.  (I’m obviously obsessed with making that make sense, cause it makes no other sense any other way.)

^But rather than pontificate that the sub is in control, I still think the whole practice is a reciprocal, mutual power play (I mean hello, ain’t it stupid to talk about power here besides the draw and attraction it has to the involved parties? That’s really all it is . . .) cause both parties are introducing consent. Both parties can instigate or kill that attraction, and it’s a shared strange power between those two people, and really doesn’t have to concern anyone else.  Unless that’s what you’re into.

Dunno, I like Kink as a business.  I think it’s actually a place that celebrates that sub-space is a runner’s high of fucking. Or challenges that if you haven’t clenched or bitten down or beaten right the thing in the way you want to, how much have you lived, really? And there’s all sorts of extremes and in betweens to those things. There’s a whole list of shit that you don’t even know about, cause I don’t.

Which’s why I’m not saying chains and whips are necessary. I just really like Simon’s Quest being an option in our world.

Anyway, my most womanizing buddy likes to date a million billion women a week. Thats a slight exaggeration, but also no lie, and I’m gonna rag on him a lil for it. This practice tells me that he knows how to manage relationships with women to get them into bed, but that he’s not in touch with a freakier side. Or that, I mean, his freakier side is obsessed with managing all these days, and getting into the hook up point, and donning a rubber, and never getting an STI.  Really, that’s it! Serial dating is actually about the serial dating for serial daters.  Surreal date that shit. Suppose that both of you could get pangs the next day.  Fuck serial dating, maybe it’s more interesting when two people find each other who’ll do all sorts of strange shit together. Or know the perfect boundaries of their permission and never violate that. Yep. Thinking about what that means right now makes my heart go pitter patter.

I think for men it doesn’t work for treating vaginas the same way you’d treat a cocaine-addiction model in that if we look at enough, they should gets old. It’s a fact of psychology – and if you disagree, that’s sweet, but maybe you haven’t looked at enough.  After you get your bestial libido out, it’s really the psychological libido – that weird recess in your brain where if you’re a fucked up animal with strange impulses that’ll release chemical relief, that’ll be most stimulating.  And in a way, I think that’s way more intimate, and way more interesting than reducing fucking to hole humping. Actually, for smart men, should feel it’s insulting and regressive if we’re just supposed to be some sorta man-dog who’ll love to obsess on a hole.  Instead, talking about life’s holes is groovier, man, and what you wanna do with them, and what you’re gonna do now because it fascinates you, and how you’re not gonna question it and maybe they’d love it if you didn’t either.

So don’t forget not to sleep on it, but also Push It. If that’s what you’re into. I think maybe the part of us that give rise to ego and quirk gives rise to those sides.

(Shit, maybe lots of my favorite songs have been about kinky sex and the like, and I haven’t even realize it.)

Cause I’m confident that people wanna get headfucked, at the heart of it all.  That the ones who aren’t just bored with life will need some sort of real allure and beacon to mindmeld when physically connecting with another. That they want someone else to gain their consent for it, and alleviate this pent up backlog of unrealized fantasy. Take them. They’re beautiful.

That sort of stuff.

And all this is not to diss the people who live lives are oriented away from the kinky shit.

Totally don’t see a problem with enjoying your dates and chocolate sex, too.

I just think it’s an easy trap to become too obsessed with shrewd needs that’re ultimately Hallmarked out to know what we’re really intrigued by / missing.